THE SCIENCE BEHIND “THE MARTIAN”

Yesterday on the blog, we touched upon NASA’s recent discovery of flowing water on the surface of Mars. Today we’ll be looking at the science of the new sci-fi movie The Martian, and how it compares to real problems that astronauts must face when they get there.

Every science fiction writer has been intrigued by the red planet, from HG Wells, Edgar Rice Burroughs, Ray Bradbury, to Andy Weir, and myself included. Something about us compels us to believe that there is life, or could have been life at one time. The story of The Martian is no different, blending real science with the struggle for survival on a inhosptiable world not our own.

Set in the 2030’s, Mark Whatley is on the third manned mission to Mars, when a sandstorm strikes, and he is stranded by the rest of his crew. NASA disputes some of the scene, because large objects are  moving when they shouldn’t have been. Due to the thin atmosphere and gravity, winds move much slower than first thought.

The reality of colonizing Mars is very close to what NASA is currently working on. President Obama recently unveiled a plan to send astronauts to Mars by three phases:

Several issues will have to be worked out for survival on the red planet. In the book, there is a structure in which he grows food that is a solid structure.  One problem that they fail to address in the film is that you would need an air-tight structure that was pressurized, due to the lack of  pressure on the Martian surface. Just like too much pressure is not good for our bodies, neither is too less. 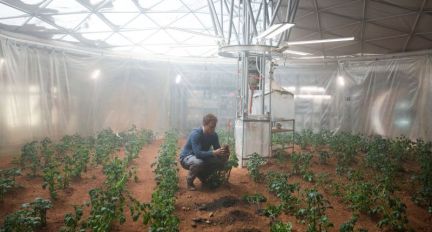 Complex mechanical oxygenerators are needed to supply oxygen to breathe. On the Curiousity rover, it is extracted from the air or soil. In the movie, Matt Damon solves this problem by growing plants.

One thing that isn’t mentioned in either the book or the movie is radiation. Mars has no Van Ellen belt, and is unprotected from cosmic rays. Even in a space suit, a year’s time would give you cancer. Scientists have addressed this problem by proposing to bury a shelter or build in the lava columns found there. Dirt and soil are excellent shelters against radiation. NASA is also working on lightweight material that works almost as well as the heavier lead.

Lack of water is a big problem 35 million miles or more from home. Curiosity solves this problem by extracting it, heating it, and draining out the liquid. This is needed to grow any food there, and for drinking and bathing. In the movie, Whatley uses a bag of potatoes with him to grow more potatoes. Although NASA is growing lettuce onboard the International Space Station, it is unlikely any with them on such a long mission would be fresh; more likely irradiated instead. Theoretically, however, if seeds were brought along, it could work. The biggest problem is lack of nutrients in the soil. Whatley solves this by using his own increment to fertilize the crops. This could be easily solved this way, or by bringing them with you.

The last problem is the extreme temperature differences, that can range anywhere from -70° F to 70°F. Whatley solves this by using the Curiosity’s Radioisotope thermoelectric generator as a heating device, which is dead on with NASA’s description of the device. Although he doesn’t use it as such, it could also be used a battery for other powered devices.

Overall, the science is mostly dead on. I always believed that in all science fiction movies and books, there should be a mixture of science and fiction. Even in my own novels, much of its based in real science, although much of it is still speculation. Science starts with speculation, until it’s proven fact.  Wormholes and Einstein-Rosen bridges are purely fictional, now, but who knows what secrets of the universe await for us in the future. Have a great weekend, and I’ll be back on Monday with a brand new series!

Since astronomers first started looking in their telescopes, it was long believed that there was water on Mars. The first observers pictured great canals, lakes, and rivers on the red planet, and visualized how a great civilization lived there. Well, turns out, that they were half right.

There is now conclusive evidence from the Curiosity rover that there are active ice flows on the surface of Mars. It is also believed, although there weren’t  any aliens, that there were indeed rivers, lakes, and maybe even an ocean at one point in Martian history. And where there’s water, there’s the possibility of life.

Which is why NASA is talking about a new mission in the 2020’s to investigate the ice flows to find microscopical organisms. When summer reaches about 70° at the equator, it causes perchlorate salts to lower the freezing temperature of the ice flows, and the water remains liquid. It’s in this liquid that NASA believes life, if any, would exist.

Water on Mars would be a significant breakthrough in the prospect of colonization of the red planet. It can help us survive by providing a drinking source, and a growing source for crops. In the new film, The Martian, Matt Damon’s character Mark Whatney becomes stranded after a team of astronauts leaves the red planet. The rest is basically a survival film, using his ingenuity and knowledge to remain alive until a rescue mission can retrieve him. I haven’t seen it yet, but I’ve read the book, and the accuracy of the technology is superb. 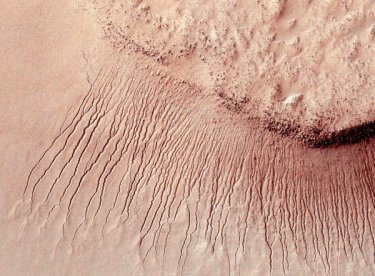 Tomorrow, we’ll look at the science behind this space survival film, and how they incorporated it into the movie. Until then, keep your eyes to the skies for any “Martians!”