DRAGONS AND DINOSAURS:    FACTS AND FICTION

We have all heard of the myths of dragons. Knights went off to fight against the beasts, people in the bible feared them because they were creations of the devil, or the devil himself incarnate, and the ancient Chinese and Sumerian cultures believed they brought good and bad luck.  Who can forget Puff the magic dragon, a song we sang as children, and Smaug, from The Hobbit.  It is commonplace in dragon fables for these creatures to protect their huge collections of gold, stolen from neighboring towns.  They are able to fly, are massive animals, and can breathe fire.

But is there any truth in these stories?  There is religious evidence in the bible for the existence of these beasts, but physical evidence is much harder to produce.  In 2002, that physical proof may have been found.  A prehistoric skull, dating back to 66 million years ago, at the end of the Cretaceous period, was found in North America.  It was that of Dracorex, a one of a kind fossil, from the genus, Pachycephalosaurus, or horned dinosaurs, that solidified the dragon theory.  This strange dinosaur was 11 feet long, and as it grew to be an adult, its head was slightly larger than its body.  There is no evidence, however, of fire-breathing ability, but this myth probably has credence in the fact that many dinosaur bones and footprints were found by volcanic deposits and volcanoes themselves.  The belief that reptiles had wings likely comes from the Pterosaurs, and T-Rex definitely has the teeth of a dragon.

There are some common reptiles that resemble dragons; such as  crocodiles, alligators, and the Komodo dragon, the only reptile to have a forked tongue, other than snakes. The spiny lizard, which looks more like a dragon than any other living animal, lives in one of the most driest places on Earth-the Outback of Australia.

I have always been a huge fan of dragons, and Smaug is definitely one of my all time favorite fictional characters.  After I complete my Dimension Lapse Trilogy, I hope to also complete a book using dragons as my central characters, but that is much further down the road.  I wrote the framework of the story when I was 13 years old.

On Monday, we will start a new series, and an age old question.  Did we evolve from apes, or were we a separate species created by a spiritual being, or were we created by an alien civilization?  Weigh in on the debate, and give your own opinion, when we explore Evolution and Creationism.  Until then, here are today’s links:

AGE OF THE GIANTS

After the Carboniferous period, the dinosaurs lived and dominated the Earth for 165 million years, longer than any known species on the planet.  They lived during the Mesozoic era, which consisted of three periods; Triassic, Jurassic, and Cretaceous.  During this series, we will spend a day on each time period, investigating the different animals in each time period.  First of all, we have to ask the question-exactly what were the dinosaurs?

Scientists have speculated for years whether dinosaurs are reptiles or birds.  The answer is really they were both, and neither.  Birds are believed to be their descendants, and direct relatives of Archaeopteryx, the earliest birds, which had feathers.  It is now believed, however, that other dinosaurs had feathers as well.  Pterosaurs, Plesiosaurs, Ichthyosaurs, and the Dimetrodon were not really dinosaurs, but a subspecies of marine animals and   ancestors of mammals.  There are 1850 known species of dinosaurs and only 25% of all possible species that ever existed.  The smallest known is a mere 1 1/2 feet long and 110 grams.  The largest is 75 feet long and weighs 130,000 lbs.  They were once believed to be cold blooded and sluggish, but scientists now know they had an elevated metabolism, were warm blooded, and actually quite fast, even large ones.

Dinosaurs were reptilian in nature, but that’s where the lizard similarity ends.  Modern reptiles are their descendants, but only certain species.  Other species evolved to adapt bird like features, such as feathers, bipedal legs that retracted inward as opposed to mammals which are outward, bending at the kneecap.  Pterosaurs, which were more closely related to birds, still had a reptilian appearance even though some possessed feathers. 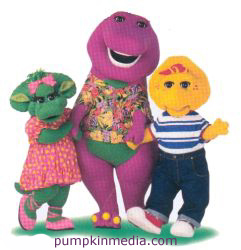 They have been the subject of books, movies, and children love them.  Just look at the popularity of a purple spotted fellow named Barney.  My daughter loved him as a child, and never missed him when he was on TV.  There is also a possibility in ancient and medieval  texts that humans often confused fossils and bones with the belief in dragons, which are a staple of cultures all over the world.  There is great speculation over the real existence of dragons in mythology among the religious community.  It is more likely of a miss-classification of  two or three separate species of dinosaurs.

Could dinosaurs exist on other words other than our own?  Sure they could, but the atmospheric conditions have to be right, as well as other factors.Tomorrow we will begin our series on the Triassic Period, the beginning days of the “terrible lizards.”  Until then, here are today’s links:

After fish had walked out of the oceans onto land, the Earth began to change.  From 250 million to 200 million years ago, Therapsids(early mammal-like reptiles) and archosaurs began to become the dominant life forms among the terrestrial vertebrates.  Both the start and the end of the Triassic period are marked by mass extinction events.  At the beginning of the period there was a decrease in sea life due to high carbon dioxide levels in the oceans.  At the end there was major volcanic activity due to shifting of continental plates.  There was only one continent at the time, called Pangea. It was hot and dry with deserts, but some conifer forests near the oceans were present as well.

The therapsids, such as the Pristerognathus at the time were part reptilian and part mammals, but there were also small shrew-like mammals who lived as well, and were some of the first creatures to bear living young. By the end of the Triassic, mammals were more present, but this reversed during the Jurassic.   In the ocean, Ischithyosaurus, the predecessors of whales and dolphins, also bore live young, and could be up to 50  feet in length, and weigh 30 tons.  Other sea life included early Plesiosaurs and eel-like dinosaurs as well.  The first Pterosaurs were also beginning to emerge.

On land, smaller dinosaurs such as Ceolophysis were the predecessors of raptors, and were quick and agile hunters, probably of smaller mammals or reptiles.  It is also believed that they were cannibalistic, due to finding smaller bones within their fossils.  Larger dinosaurs such as Plateosaurus were the forerunners of the huge Jurassic animals, measuring about 21 feet long and weighing  3 tons.  Ticinosuchus was the predecessor of large carnivores such as the Allosaurus and the infamous Tyrannosaurus Rex.  During this time, the division of mammals and reptiles led to more diverse life on the planet.  Insects, such as beetles, millipedes, and centipedes, as well as Arachnids, such as spiders and scorpions began to adapt, at much larger sizes than they are today. 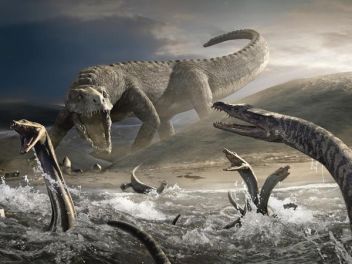 After the Triassic, the world began to shift and change, resulting in a partial extinction of early dinosaurs.  Tomorrow, we will move on to the next period and the most well known-the Jurassic.  Until then, here are today’s links: 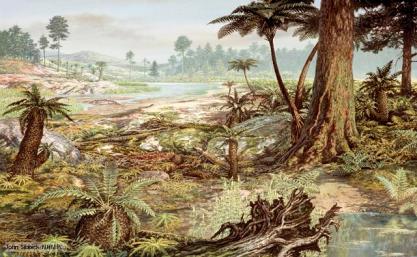 THE REPTILES RULE THE EARTH

The Jurassic period was the dominant period of the dinosaurs, and although there were more species in the Cretaceous, the Jurassic contained more of the larger sauropods, such as Apatosaurus, Diplodocus, and Briachosaurus, which were plant eaters.  Most of the plants of the time were palm like trees, ferns, and coniferous forests.  The world was much more warmer and more humid, with increased volcanic activity.  The period lasted from 200-145 million years ago, and the world consisted of two continents-Laurasia and Gondwana.

Rising larger carnivores, such as Ceratosaurus, Megalosaurus, and Allosaurus began to hunt and eat the larger sauropods, and although the carnivores tended to have slightly larger brains, they didn’t adapt as well as their plant eating cousins.  Oceans still contained the Ichthyosaurs, but they were joined by the larger Pleisosaurs, squid, early sharks, and other forms of fish.

Pterosaurs, such as Pterodactyls and Pteranodons were the dominant flying vertebrates.  There were some forms of early birds, but these were not dominantly present until the Cretaceous.  The Cyodonts, a small rodent type of mammal, are said to be the common link between reptiles and mammals. 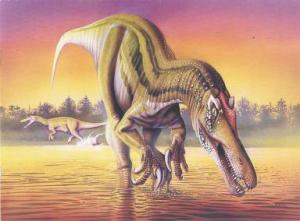 In the movie, Jurassic Park, and its sequels,  there are several misconceptions about animals of the period.  Tyrannosaurus Rex, for one didn’t appear until the Cretaceous period.  Who could forget the scene where they are being chased by a large T-Rex.  This part is right, however, because even though Theropods were big, they were fast as well, and very good hunters. There were also other dinosaurs in the movies that were not present during the Jurassic period.  Although this is not integral to the plot, a hardcore dinosaur buff might  take offense to this.  Stegosaurus lived during the Jurassic as well, and it also saw the rise of other armored dinosaurs, plant eaters and meat eaters alike.

Tomorrow, we will investigate the final period of the Mesozoic period-the Cretaceous, and the fearless lizard himself, T-Rex.  Until tomorrow, here are today’s links: 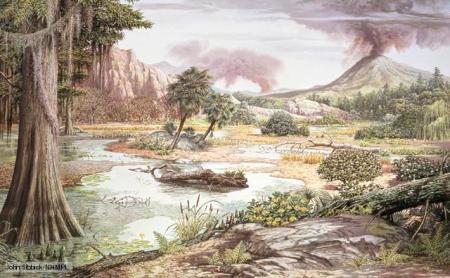 THE END OF AN ERA

The Cretaceous period of the Mesozoic era marked the demise of the dominant species of the dinosaurs.  Thriving from 145-66 million years ago, dinosaurs, sea animals, insects, and mammals began to diversify.  It was a relatively warm climate, with an increase in volcanic and seismic  activity.  The continent of Gondwana broke up into South America, Antarica, and Australia.  North America was bordered by inland seas, and 1/3 of the land area of the Earth was submerged under water.  Higher levels of carbon dioxide are likely the cause of the cooler temperatures toward the end of the period.

There were many varied types of dinosaurs during this period.  The first ceratopsians emerged.  These were only found during the Cretaceous, and were horned dinosaurs with bird-like beaks that allowed them to grind their food.  They were herbivores and included the Triceratops and Protoceratops, although there were other species as well.  They were among the last group of the dinosaurs, and elephants and Rhinos are the result of their evolution.  New types of birds and mammals emerged, as well as common day amphibians, reptiles, and snakes. Bees, wasps, ants and beetles.  About this time, the first flowering plants appeared as well.

Some of largest carnivores existed at the time, including the Tyrannosaurus.  Although he was close to thirty feet, he was not the largest land hunter at the time.  This title belongs to Spinosaurus, a huge spinal-finned creature that could reach 50 feet long, and weigh thirty tons.  There were also smaller predators, like the velociraptor,  who would hunt in packs to pull down their prey and attack viciously, using their   serrated claws and teeth. 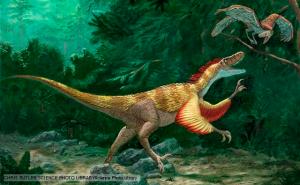 In the oceans, there were still Plesiosaurs and sharks like the Meglodon, and snakelike Mossasaurs.  Towards the end of the era, it is the general consensus of paleontologists that a cataclysmic event, such as an asteroid that struck the Yucatan peninsula and created the Chicxulub crater, caused the demise of the giant reptiles.  It took another 8 million years for the next dominant species-mammals to adapt to their new, cooler environment.    In between, insects survived, offering food for smaller mammals.  It is unknown how long this development actually took place, there was a period that the atmosphere   was uninhabitable.

Tomorrow, we will look at the correlation between myths of dragons and dinosaurs.  Until then, here are today’s links: